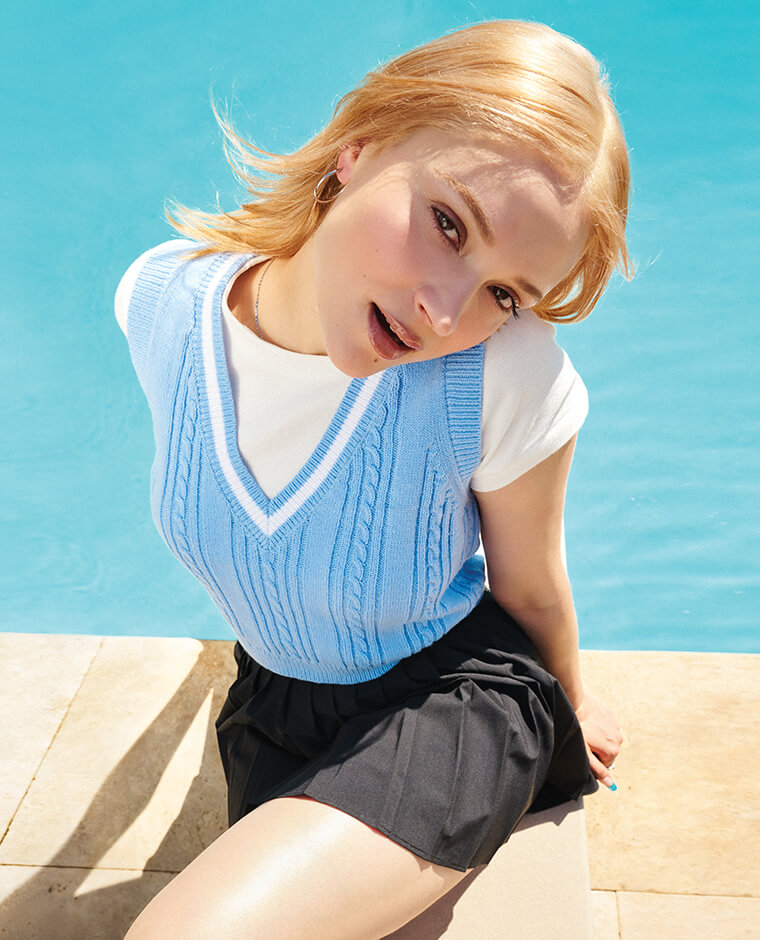 Q. Talk to me about your outfit.

A. I'm wearing a cute little vest and a tennis skirt. Tennis skirts are my favorite thing to wear, especially when I'm performing, and with some big boots — it just makes me feel really powerful.

Q. How does performing make you feel?

A. Performing is the only time I'm really in the moment. And the eye contact with the fans is what makes it worth it. Obviously, right now, none of that is happening, but soon.

Q. Are people doing stuff with your music online, like on TikTok? What is that like to see?

A. Yeah, my music on TikTok is starting to take off a little bit, but I just started. I was not into it at first, and then I did a really silly video, and that went viral, and I was like, "All right, I'm motivated now."

Q. Tell me a little bit about your background and how you became a musician.

A. I'm French, from my mom's side. I was born in Paris. And I'm Algerian from my dad's side. And then I grew up in San Francisco. So a little bit of all three, but I don't speak Arabic, because my dad never taught me. I started singing when I was little and then I started writing music. After high school, during which I was doing talent shows, I moved to New York. That's when I met everybody at KidSuper. I moved into this building with five dudes, and they taught me how to put out music independently, because I didn't really realize that you could do that. So I was putting out my music on TuneCore, and something went viral. And then I was like, "Okay, how do I make a business out of this? Because this is what I've always wanted to do." So I made my own website, photo shoots, music videos. I used to edit all my videos, all my tour visuals, and just do everything myself, because I didn't even have a team, just my manager, Doug. Now, I have a team, but I'm still doing a lot of it myself.

Q. Which of your songs have been the most personal to you?

A. My most personal songs are Desert Rose (or dessert rosé), High Highs to Low Lows, and Summers in Vegas. Summers in Vegas's about my dad, even though it gets added to some romantic playlists. Desert Rose is also very personal. It's about my story, about my family in Algeria and my cultural differences. And then High Highs to Low Lows is about the beginning of my career and being blinded or tricked by people who said they would do this and that. Once I wrote that song, I realized that I actually didn't really need the help of other people, and I could do it on my own. So those three.

Q. What else is that song about?

A. High Highs to Low Lows was not only about mental health, but it was about going from nice hotels, luxury, to then coming back to my restaurant job. I was working at Bareburger and I was a hostess at Pizza Beach, these stores in New York. And so it was about one day being on a yacht with some celebrities and then the next day just being hungover at Bareburger. Also about getting my hopes up really high and then shattered. So I'm learning to be mid mid to mid mid—that's my second album coming this fall. 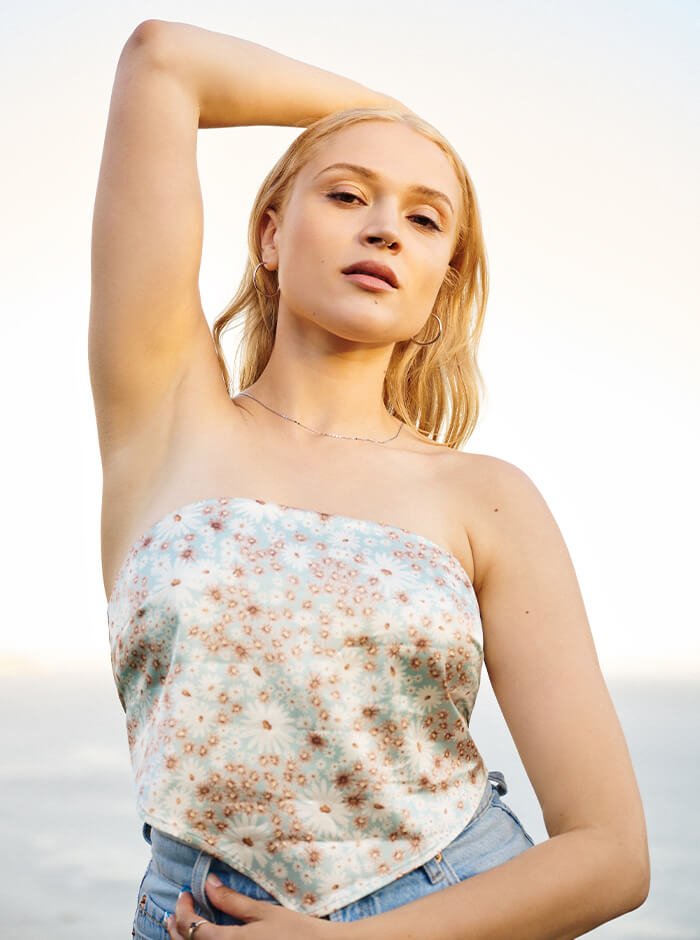 Q. Can you talk a little bit about how it feels to perform live when you can?

A. Performing live was my biggest fear for most of my life. I knew that I wanted to sing, but I was terrified. I even auditioned for American Idol when I was 15. And there were these groups of people singing while they were waiting to audition. And my mom was like, “go in, sing in the circle.” And I was like, “no, I can't.” To this day I still feel like that shy girl inside. But when you know that you have fans waiting there who know your music, it's way less scary. When you're opening for someone, it's a little bit scarier, but I kind of just blackout before I perform — not with alcohol! And then after, I feel very still because I think I give my all on stage.

Q. What do you think is that connection between summertime and music?

A. Summertime is just carefree. I mean, first of all, a lot of people don't have school, which is lit. Plus the weather is amazing, which makes you want to listen to music. There's just something in the air in the summer. Music goes hand in hand with weather, sad music for the rain, happy music for the sun. 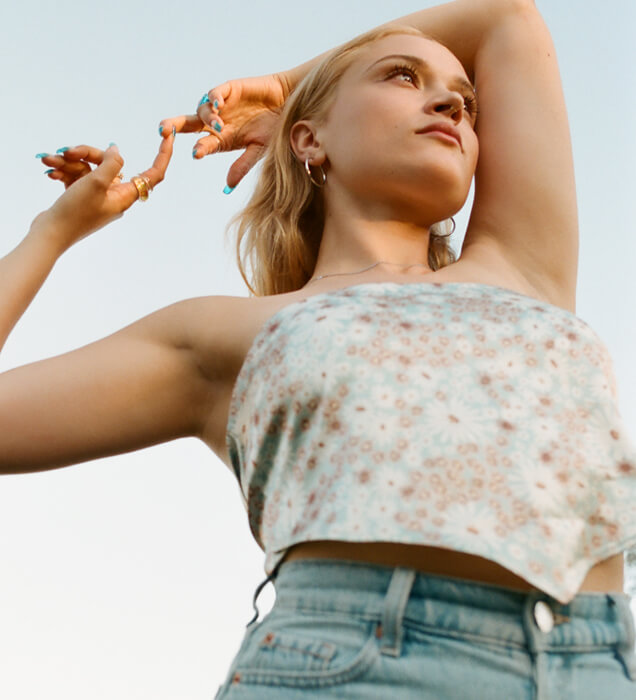 Q. What do you think makes a good summer playlist?

A. A good summer playlist is just a whole bunch of bops. No sad stuff. Nothing sad, nothing with too long of an intro and it needs Megan The Stallion on it.

A. I found my style just by being in San Francisco. I discovered my own style by observing people on the street in San Francisco. There's just this thing about girls from San Francisco and from the Bay Area. Now I would say it has a blend of thrifty and sporty. I like to wear tennis skirts a lot. I like to wear baggy pants. I have the tomboy look too, like oversized shirts, vintage shirts, and a lot of racer jackets. A lot of NASCAR jackets. I've just counted them, I think I have 15. I bought one in Japan and I bought one in Korea, New York, and San Francisco. Every piece of clothing holds a lot of sentiment for me.

Q. What's most important to you right now?

A. Right now, what's important is my happiness. Last year, I had to face mental health issues and start therapy. Now, I feel like I got it under control and I'm able to just focus on being happy. Because I realized, if you are a creative person, once you're happy, you will just be creative inevitably. I was forcing myself to be creative, but it was so hard. I was focused on the fact I couldn’t write, instead of working on being happy.

Q. So you felt like you could only be creative when you were depressed. And then you sort of realized that it doesn't have to be that way.

A. Yeah. I don't think it's healthy to have to be depressed or in some form of chaos to be creative. I think a lot of creative people do feel that way, but it's not a healthy way or sustainable. It's way cooler to be happy than to be sad. When you are depressed, it's so easy to get stuck in it.

Q. Do you feel like lately the world has been more able to talk about mental health?

A. Mental health has become a popular subject. I hope that when people talk about it, they're not just saying it to be part of this thing. I know that some people think it's a trend, but mental health is not a trend. Growing up with technology, we're stuck to our phones all the time, so everybody's going to be depressed, because you're not really living. The fact that so many musical artists are talking about depression makes it a lot easier to get help for it. There shouldn't be any stigma or shame in getting help.

Q. Do you think there's a lot of pressure as a musician — especially with social media — to always be having a good day?

A. I think there's pressure to show a happy side on social media, as an artist. But I also think there's so many cool artists just sharing themselves crying or that they’re having a bad day. And usually I notice those are the posts that most people resonate with. But I have a hard time showing that side, just because I'm like, "I'll just sing about it, and I'll just show my silly side on Instagram."

Q. What are you most proud of?

A. I'm most proud of my album, High Highs to Low Lows, which I realize now... I'm kind of milking it. I'm proud of the new body of work I'm making. I'm proud of the fact that I have my own apartment, pay my mom's phone bill. I'm good. I'm taking care of myself, and I don't need help from anybody. I like help, but I don't need it. And yeah, I got good friends and my family's healthy. So we Gucci.

A. How old am I going to be then? I hope that I am chilling in a house that I purchased. I'm still making music, but maybe also a voiceover queen. Perhaps have acted in something. Cats running around. Happy making music. Maybe with somebody, maybe with nobody. Maybe a Grammy. I would like one, but I don't need one.

Q. What message do you have for someone who's watching you and feels you're them in 2031?

A. I always have a hard time realizing people could look up to me, potentially. I would just say you got to be yourself. I’d say, don't be anybody else, because we can tell. People want that real shit. Just be yourself and write songs and practice, and if you suck, you might get better. I wasn't always that good. Trust your gut, because it's definitely right. And don't sign any weird paperwork without getting a lawyer. That is a big one.